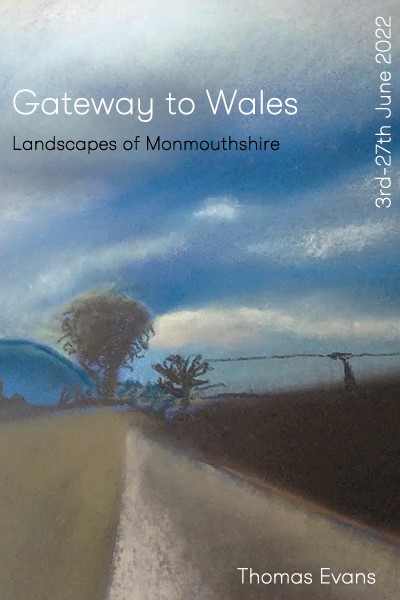 Thomas Evans was born in Barnet in 1978, grew up in Buckinghamshire and studied a BA in Fine Art at Chelsea College of Arts graduating in 2000. Shortly after, he exhibited at the Royal Academy Summer exhibition in 2001 as well as in other group and solo shows in London. After a period of further study focused on more commercial areas of creativity, and time spent working in both advertising and the world of technology start ups in London and Madrid, he returned to the UK in 2017 to re-establish a fine art practice. He exhibited most recently at the Gallery At Home in Usk, in the group show 'Home is Not a Place'. His show this summer at the Torch (delayed from 2020 due to covid) represents his first recent solo exhibition. It will consist of pastel drawings made in response to the landscape close by where he presently lives, an area he has much affinity for being the home of his maternal grandparents which he has visited regularly since he was a child.

"Returning to the UK to live, and for the first time in a predominantly rural area, having previously been accustomed to a bustling European capital city came as a shock to the system and I made this body of work while adjusting to the very different pace of life. While there is a sense of melancholy and lack of human activity, I have also captured the peace and calm that I found here and the space for contemplation. I believe the pictures are meditative and indeed while making them I was engaged in a daily meditation practice. I was also conscious of referencing  artists whose work I admire who have an affinity to the headspace I was in at the time, such as Mark Rothko, Sean Scully or Milton Avery, wondering how they might respond to the same environment."

Tom is currently undertaking The Online Drawing Development Year with The Royal Drawing School and Contemporary Painting Mentoring with the New Art School.