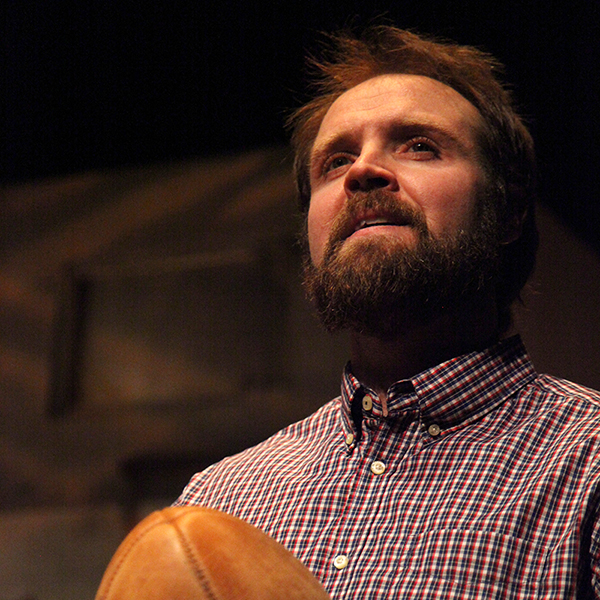 
A new chapter is about to be written on a continuing success story as production has begun on a special drama paying tribute to a true Welsh folk hero. Adapted for television from the award-winning* stage play of the same name by Owen Thomas, ‘Grav’ is a film about the life of Welsh cultural and sporting personality, Ray Gravell, one of Welsh rugby's most revered figures.

Over the last six years, the Torch Theatre Company stage play, written by Owen Thomas, directed by the Torch Theatre’s Artistic Director, Peter Doran, and performed by Gareth John Bale, has been seen by thousands of audience members across Wales, England and Scotland, and has also toured to Washington and New York. ‘Grav’ is widely regarded to be the play that inspired the Welsh Rugby team to win the 2018 Men’s Guinness 6 Nations Championship, after being performed to the Welsh team in the Principality Stadium ahead of their famous win over England. Now, the ‘Grav’ story continues, as it makes the leap from stage to screen, in this one-off programme, which will be screened on S4C in September.

Following his memorable on-stage portrayal of Ray Gravell in the remarkable one-man show, Gareth John Bale reprises the role of ‘Grav’. Award-winning director Marc Evans, who has worked on programmes such as The Pembrokeshire Murders, Manhunt and Y Bomiwr a'r Tywysog, will direct the television adaption of the show.

“I am thrilled to be working with Marc Evans and S4C as ‘Grav’ continues the next part of this incredible journey that all began at the wonderful Torch Theatre.”

Branwen Cennard, ‘Grav’ co-producer on adapting the stage play for the screen:

"Working on a project like this, to create a television adaption of Owen Thomas' hugely successful stage show, is very exciting. The original drama goes to the root of what drove Ray as a person and the show was universally praised.”

"In adapting the show from the theatre to film and television, the drama has developed significantly. But the story remains the same, and we hope that the additional visual layers, under the guidance of director Marc Evans, will lift the production to an even higher level" added Branwen.

The Torch Theatre’s Artistic Director, Peter Doran, on the next chapter of ‘Grav’:

“This piece never fails to amaze me, we’ve performed the show around 120 times, sold out in Edinburgh (Fringe Festival), taken it to America twice, if it wasn’t for Covid we’d be in South Africa next month, we were invited to the Adelaide festival, we opened the last rugby World Cup and now it’s being adapted for television, I really don’t know where it will end. I really can’t think of any other new Welsh plays that have had such a journey. It’s all very exciting.”

Known to millions for his legendary exploits on the rugby field, ‘Grav’ was and is so much more than that. An actor, a cultural icon, a father, a husband, a man with a life packed full of stories that deserve to be heard once more. Since his death in 2007, thanks to tales of his bravery on and off the pitch, the legend of Ray Gravell has continued to grow. In ‘Grav’, this legend will grow further still…