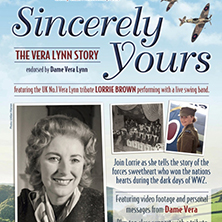 about the life of Dame Vera will be paying a visit to the Torch Theatre in Milford Haven.

Lorrie Brown has been performing a tribute show to Dame Vera Lynn for over 25yrs and in 2013 she was honoured for her achievement by the agents association and named UK No.1 Vera Lynn tribute.

After Dame Vera heard of Lorrie’s award, she invited Lorrie to meet her at her home. Lorrie says, ‘It was both a dream and terrifying, I have been performing the songs of this great lady for over 25yrs, I have performed in football stadiums to 33,000 people and sang in some of the country’s finest theatres but this was the most nervous I have ever been. In the end she was a perfect host. As soon as I entered the room she gave me a hug and congratulated me on my award. She was just so happy that I was keeping her music alive. We sat and talked for 3hrs about her time entertaining the troops and especially about her time in Burma, she had a very strong connection with the troops in Burma and she was so proud to have been allowed to go out and entertain them’.

Lorrie is now taking the next logical step and shortly after Dame Vera’s birthday, she began a tour of a show that she has devised with her husband and co producer Gary Birtles. As Lorrie explains, ‘2017 is Dame Vera’s 100th birthday and the nation is honouring all her achievements from her life.

people about her life before the war and what shaped her into becoming the forces sweetheart.

She started her career singing in the dance bands and that is where we will start. We will be performing on stage with a live 7 piece band and singing many of the songs she would have sung in her early days, then moving on to her time entertaining the troops and hosting her own radio show ‘Sincerely Yours’, which is where the title of the show comes from. Dame Vera had many hits so we will try and get as many in the show as possible all with that live band sound. Also on the bill will be supported by another wartime favourite, George Formby performed by one of the country’s leading George Formby tributes, Colin Bourdiec’.

In her 25 years, Lorrie has performed in many different venues, including Ramsgate Tunnels and the

Blackpool Opera House to 3000 ex-servicemen. Lorrie says, ‘The 2 that really stand out are performing on the pitch at West Ham Utd during halftime on Remembrance Sunday in 2009’. It was amazing singing to 33,000 people and hearing them all join in with ‘We’ll Meet Again’.

The other highlight was spending 2 yrs touring with the legendary Danny La Rue, performing in some of the country’s largest venues. Danny was a big fan of Dame Vera’s and he asked me to join him on his tours.

‘Sincerely Yours. The Vera Lynn Story’ will appear at the Torch Theatre in Milford Haven on Monday 18th Sept. The show start at 2.30pm. Tickets are priced £14 and are available from the box office on

More details about the show are available on the web site at www.veralynntribute.eu