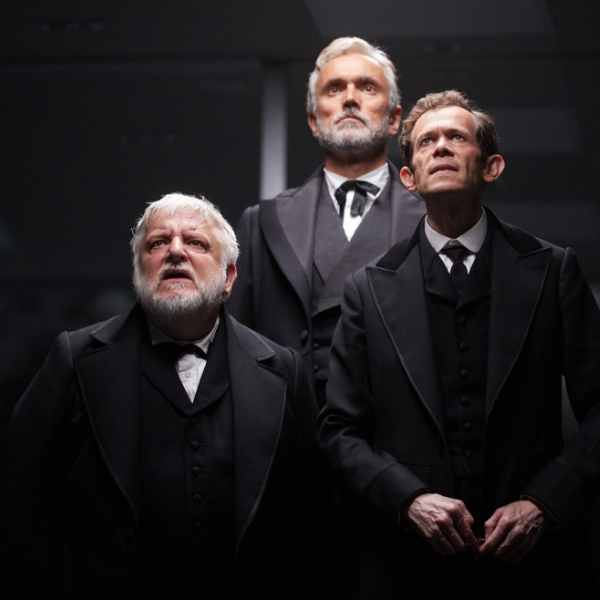 ‘THEATRE AT ITS BEST’ SCREENING AT THE TORCH THEATRE, DIRECT FROM LONDON’S WEST END


On a cold September morning in 1844 a young man from Bavaria stands on a New York dockside. Dreaming of a new life in the new world. He is joined by his two brothers and an American epic begins.

163 years later, the firm they establish – Lehman Brothers – spectacularly collapses into bankruptcy, and triggers the largest financial crisis in history.

Screening at the Torch Theatre on Tuesday 17 September as part of National Theatre Live’s 10th Birthday season, critically acclaimed and five-time Olivier Award nominated play The Lehman Trilogy is the story of the rise and fall of the Lehman Brothers banking dynasty from the birth of Western capitalism to the global credit crunch of 2008, told in three parts on a single evening.

“The thing that’s so rich about The Lehman Trilogy is that it asks a question in 2008 — how did we get here? — and then takes the longest possible view. How did this company come to bankruptcy but also how did this system come to collapse? What are these systems of finance, government and society that America and the West have built over the past two centuries, and are they sustainable? I think we’re living in the aftershock of the collapse of a lot of things that fell apart in the autumn of 2008. So although it’s a historical piece, it’s incredibly urgent.” - Ben Power, Evening Standard, 30 April 2019

Simon Russell Beale, Adam Godley and Ben Miles’ play the Lehman Brothers, their sons and grandsons. Acclaimed as “the greatest stage actor of his generation” (The Independent) Russell Beale has been a National Theatre regular since 1995, recent film and TV roles include Spooks, Penny Dreadful and The Death Of Stalin. Adam Godley is widely known for his stints in Breaking Bad and Suits. Ben Miles made his name as Patrick in Steven Moffat’s sitcom Coupling, and his stage and screen credits include Wolf Hall, The Crown, V For Vendetta, Black Mirror and Lark Rise To Candleford.

★★★★ ‘Absorbingly performed. A trio of performances you can bank on’ - Evening Standard

The Lehman Trilogy screens at the Torch Theatre on Tuesday 17 September, recorded ‘as live’ on stage in London’s West End, commencing at 7.00pm. Tickets are priced at £15 and £13 concessions, and are available from the Torch Theatre’s Box Office on 01646 695267 or visit our website www.torchtheatre.co.uk