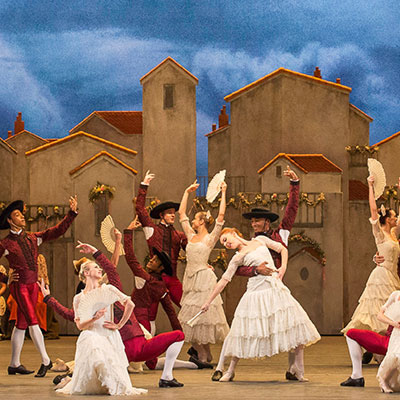 THE ROYAL BALLET’S DON QUIXOTE IS A FEBRUARY FIESTA!


Love and friendship triumph in Carlos Acosta’s vibrant production of this dazzling ballet, screening at the Torch Theatre this month.

Pembrokeshire audiences can enjoy The Royal Ballet’s charming and fun production of Don Quixote with an encore screening at Milford Haven’s Torch Theatre on Sunday 24 February, recorded before a live audience at London’s Covent Garden.

The ballet explores love, friendship and adventure. The knight Don Quixote and his servant, Sancho Panza, meet love-lorn couple Kitri (Akane Takada) and her sweetheart Basilio (Alexander Campbell) who are unable to marry as Kitri’s father wants her to marry the wealthy Gamache. Don Quixote, in true heroic style, intervenes and convinces Gamache he would rather marry the barmaid – this allows Kitri and Basilio to wed.

Carlos Acosta’s 2013 production of Marius Petipa’s 19th-century ballet brings Spanish warmth and joy to the stage. Acosta adds energy and wit to the ballet, with a lively atmosphere.

Sunny, uplifting and touching – Don Quixote is a ballet as full of uplifting emotions as it is of astonishing ballet technique.

Don Quixote lasts approximately two hours and 45 minutes with two intervals and will be screened at the Torch Theatre on Sunday 24 February at 2pm. The next production in the Royal Opera House live cinema season is The Royal Opera’s La forza del destino on Tuesday 2 April. At 6:45pm.

For more information and to book tickets, contact our Box Office on 01646 695267 or visit https://torchtheatre.co.uk/royal-opera-house-don-quixote-encore/