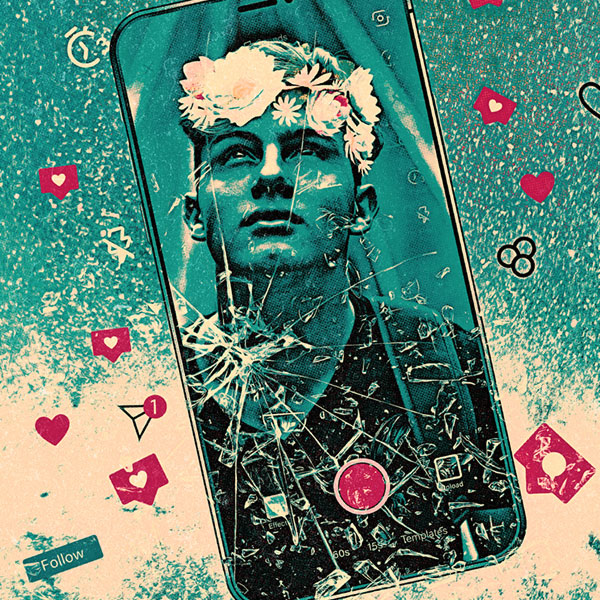 THE PICTURE OF DORIAN GRAY - REVIEWED


This digital adaptation of Oscar Wilde’s only published novel and the darkest of his works, brings Dorian Gray screaming into the present day, into a startlingly real world of social media vanity, where a modern Dorian states “we know the price of everything, but the value of nothing.”

The adaptation is written by Henry Filloux-Bennett (chief executive and artistic director of Lawrence Batley Theatre) and directed by Tamara Hardy (Artistic Director of Theatr Clwyd), created by the same team that brought viewers the online production of 'What a Carve up', the thrilling murder mystery based on the award-winning novel by Johnathan Coe. 'What a Carve up' was screened during Oct-Dec 2020.

The entire team deserve praise for bringing the dark work to life, in a drastically different format against the backdrop of a growing pandemic. Several partner venues offer the chance for patrons to book through their ticketing systems, with the production helping to support these venues.

This world exists within the pandemic, in the eerie setup of nationwide lockdowns and mask wearing. Characters are connected and disconnected by mobile phones and laptop screens, they watch events replay on a video loop, adding an extra spin on the separation of the characters and their eventual detachment from society. The isolation and focus on social media is particularly relevant to younger people. Dorian himself (an impressive turn by Ffion Whitehead) is an English student and an influencer, who struggles to gain social media followers in a world dominated by virtual living. On Dorian’s 21st birthday, his friend Basil, played brilliantly by the ever-changing Russel Tovey, offers him the one thing he craves, to be young and popular forever, for one small price. Yet caught up in the beauty and possibility of the world and its inhabitants, in particular rising star Sibyl Vane, Dorian offers his soul in return.

Whitehead previously played the lead role in the 2017 film 'Dunkirk', to critical acclaim. Just 23 years old, he plays his role with great conviction and understanding, exploring the vast psychological depths of complex character Dorian Gray throughout the 80-minute production. His more recent role in Black Mirror’s Bandersnatch seems to have prepared him for this dark, twisted tale, which has more than a touch of Black Mirror’s futuristic macabre about it.

There are some great technical tricks at the producer’s disposal for this adaptation. The image of the mirror is reinvented as the filtered selfie, with a USB stick offering Dorian the option of accepting a software programme, called New Leaf, to change his life. As the story develops, and Dorian’s life spirals out of control, the lighting gets darker and a wall hanging behind him grows more menacing as he films himself. We see him hunched over his laptop, his skin aging, blood leaking from his ear, yet on camera he looks younger, and more vibrant, even undead. His wardrobe reflects this, as he moves from casual student clothes, to a red velvet jacket and shirt with ruffles, paying homage to Oscar Wilde himself and the setting of the novel.

The modern predicament is also tied up in the storyline, with talk of Dorian always wearing his mask, wherever he goes, denoting several references, firstly to the idea of covering his reality, his ageing face and decreasing popularity, (as well as depicting the idea of him wearing an actual mask, and the masks we all wear on social media) covering up his deceit and his decaying soul. When the beauty that catches his eye, stumbles from the pedestal he has placed her on, and shows herself to be flawed, he is cruel and callus, dwelling on how their connection will affect his survival. Much like the life of celebrity in the media. The tragic result leaves its mark on a viewer who has lived through the tragedies of fame such as Caroline Flack. Emma McDonald plays Sibyl beautifully, capturing her joy of performing and her love of Shakespeare. Her vulnerability and desire to have a creative outlet and to make the most of her time during the lockdown, coupled with her desperation to succeed and be liked, is something that a modern audience will recognise.

While Lady Narborough (Joanna Lumley) being interviewed in an empty theatre, talking about her love for the arts and desire to hold a fundraiser for them, illuminates the reasons behind the production, blearing the boundaries of reality and fiction once more.

It is no secret that mental health is the focus of this production, and very much at the forefront of the message is the link to youth and social media. Basil Hallward tortures Dorian with his games, prompting suggestions and using him as a guinea pig for his new software, his obsession with Dorian bringing him down. He simultaneously posts YouTube videos of advice and guidance when using the very media that he weaponizes on his friend.

Meanwhile, bohemian Harry (played by Alfred Enoch) is an incarnation of Oscar Wilde himself, in flamboyant clothing, well spoken and speaking in riddles, watches on in disbelief. Although the relationship seems unsavoury and strange, he finds himself drawn into it too, and does nothing really to stop it until it is too late. His reactions and explanations swipe away any criticism or attempt to explore what was really going on between Dorian and Basil.

Lady Narborough, (played by Joanna Lumley) is so obsessed by her desire to save the theatre, and her much younger and handsome friend, that she doesn’t stop to wonder what has changed. When questioned if she noticed a change in Dorian, she refers to the covid mask he wears constantly and the interest in social media. She denies the negative realities of ageing and comments that only her best side appears on film. Looking down on ordinary people with an almost regal contempt.  Lady Narborough too, does nothing to question any changes in Dorian or to stop his ultimate demise. She simply uses him like a trophy. comments on his ever-evolving beauty, his youthfulness and success, fuelling the greed that feeds him.

As the production reaches it’s crescendo, so do the repetitive images of the virtual world, Wilde’s own quotes illuminating the screen and being spoken by the actors. The atmosphere and tone of the production grows ever darker, as we realise there is no way back for Dorian. He has given everything. A final virtual chat with his friend Harry, reveals his friend’s concern. How he wishes it were just the two of them again, without Basil. Dorian quotes Roald Dahl in a poignant scene that emphasises his feelings and the direction his own life has taken. “If You have good thoughts, they will shine out of your face like sunbeams and you will always look lovely.”

This light hearted and quite beautiful quote of Dahl’s seems rather sinister and tragic here. For Dorian, realises too late the real value of goodness, the origin of true beauty and popularity.

The producers leave the story there, giving the audience a final thought to sit with. As the scene fades and their faces disappear, the music plays. This is followed by the reference to mental health services and contacts for viewers, coming from an awareness of the themes that will touch quite deeply on a modern audience.

This modern-day digital adaptation of The Picture of Dorian Gray takes the themes and premise of Wilde’s Faustian masterpiece and adapts them for a new era. Incorporating every technology and trick at their fingertips, with an impressive cast and using the best talent of UK theatre.  This Dorian Gray is a production that’s frighteningly modern, hitting on every raw nerve of the current human race, a truly immersive piece of modern theatre with a heavy message.

The Picture of Dorian Gray is available for streaming from 16th-31st March*.

*Edit - Since the time of the review, The Picture of Dorian Gray had its run extended, and is now available to view until Saturday 17 April.
To book, visit: https://www.pictureofdoriangray.com/torch