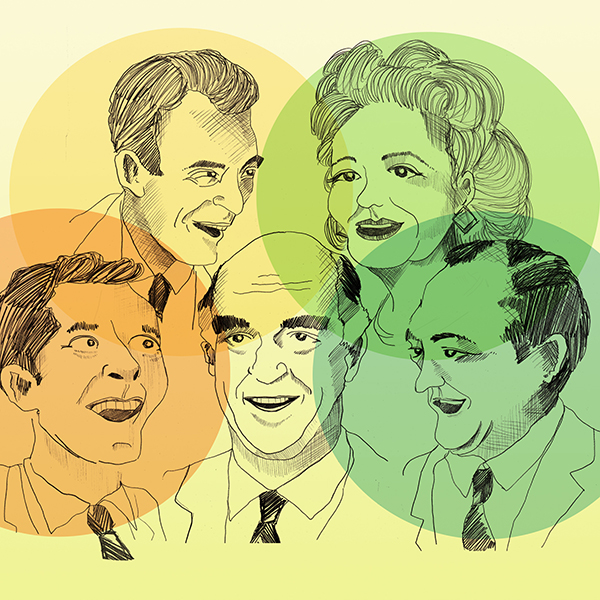 
From the producers of the UK tours of The Goon Show and Hancock’s Half Hour comes another radio comedy classic live on stage.

From 1965 to 1968 there wasn’t a bigger radio programme in Britain than the ground-breaking Round the Horne. For half-an-hour every Sunday afternoon, audiences of up to 15 million people would gather around the wireless to listen to Kenneth Horne and his merry crew get up to all sorts of mischief.

With its infamous movie spoofs and hilarious regular characters such as Rambling Sid Rumpo, Charles and Fiona, J. Peasemold Gruntfuttock, and Julian and Sandy, Round the Horne was one of the biggest and best radio comedy shows of all time, and still endures today, 50 years on.

Based on the original scripts by Barry Took and Marty Feldman, Apollo Theatre Company, first took their recreation of the classic radio comedy show, Round the Horne, on tour in 2015 for the show’s fiftieth anniversary.

Described by London Theatre Guide as “a must-see show for fans of 60s humour”, this production toured the UK three times from 2015-2017 and played for eight weeks at London's Museum of Comedy.  For this new 2020 tour of Round the Horne, the company are visiting many new venues including Milford Haven, where they will be making their Torch Theatre debut on Thursday 20 February.

So, come and take a step back in time to the BBC’s Paris Studios and experience this comedy classic live on stage. Tickets are available from the Torch Theatre’s Box Office on 01646 695267 or visit www.torchtheatre.co.uk