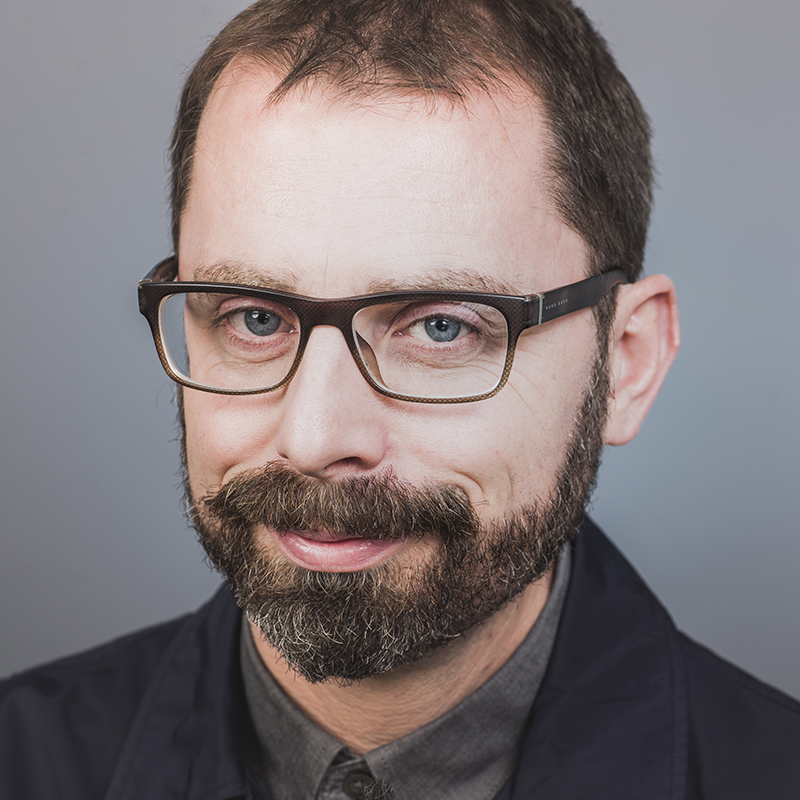 
Having previously toured to packed-out theatres across Wales in 2018 to mark the centenary of the end of the First World War, The Torch Theatre’s critically acclaimed stage production ‘The Wood’, written by Welsh playwright Owen Thomas, returns in a digitally streamed ‘virtual tour’ from 22 June – 3 July 2021. Recorded ‘as live’ at the Torch Theatre, Milford Haven, under Covid-19 guidelines during lockdown 2021, this has been a new way of working for the Torch Theatre, embracing digital technology to bring staged theatre back to audiences whilst venues remain closed.

Owen Thomas is an award-winning playwright who wrote both ‘The Wood’ and ‘Grav’ for the Torch Theatre, where he is also proud to be an Associate Artist. ‘Grav’, has toured widely to critical acclaim, enjoying successful runs in London, Washington, New York, Edinburgh, and a special showing for the Welsh National Rugby team prior to their Six Nations game against England in February 2019. In that same year, ‘West’, his first American commission, premiered in Milwaukee, to a standing ovation. Prior to lockdown, ‘An Orange in the Subway’, his new play about homelessness developed with Young Artists at The Other Room in Cardiff, was performed at the Vaults Festival in London in 2020 where it was nominated for Best Show. There are plans for some outdoor performances later in 2021.

We spoke to Owen Thomas about the play's origins and this new digitally streamed production... 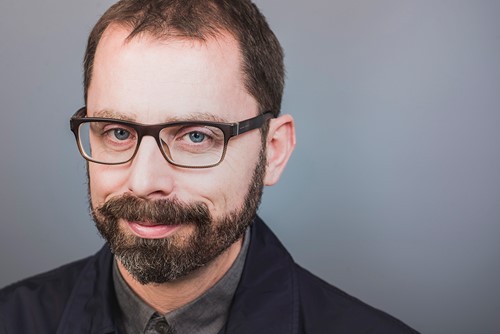 Hi Owen. Tell us a little about yourself, how did your writing journey begin? When did a passion become a career?

I always wanted to be a writer. Growing up on a farm in Mid Wales, I was often in my bedroom writing poetry for Eisteddfods or for my own amusement. I wrote and staged my first short play at Gwernyfed High School when I was 15 years old. I wrote my first full length play, ‘The Dead of Night’, in 2001, so this year marks 20 years as a Professional Playwright. In that time, I have been lucky enough to have plays performed across the UK and the US. Winning ‘Best International Show’ at the Hollywood Fringe Festival with ‘Richard Parker’ in 2012 was a major turning point in my writing career. But it was undoubtedly the success of ‘Grav’ that gave me the confidence to write for the stage full time. I will forever be grateful to Gareth and Peter and Grav’s family for the opportunity to write the play.

Three years ago, and with the full backing of my family, I decided to give up my career as a teacher in order to become a full-time writer. So far (touch wood) it has been a great decision, and there are some very exciting projects in the pipeline.

Although ‘The Wood’ is written for the stage, its setting is very real – looking back on the events of the Battle of Mametz during the Great War – and was based on real events, as experienced by the Welsh soldiers of the 38th Welsh Division who fought at Mametz Wood, during the First Battle of the Somme in 1916. Can you tell our readers a bit about those origins?

World War One saw so many costly battles in which millions of people lost their lives. ‘The Wood’ focuses on the Battle to take Mametz Wood by the 38th Welsh Division. The battle was fought between the 7th and the 12th July 1916, as part of the First Battle of the Somme. The wood was ferociously guarded, and by the 12th July it had been largely cleared of enemy fighters, but with a huge loss of life and life changing injuries inflicted on the men of the 38th. The play looks at the friendship between two men who fought in the battle, but told through the eyes of an old man who has gone back 50 years later in a bid to lay a ghost to rest. It is a fragment of the friendships and relationships that were lost within the shell blown trees. 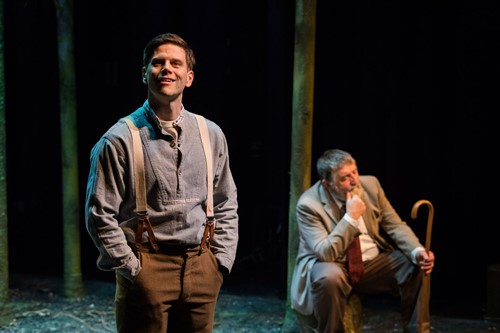 Was this your first collaboration with Ifan Huw Dafydd, whom some of our readers may recognise from drama series such as The Crown, 15 Days, Requiem and Stella?

Yes, this was our first collaboration, and is in fact the first time I have adapted somebody else’s idea for the stage. But when Huw first outlined the story, I was hooked. Huw is incredibly passionate about this story and it was this infectiousness that persuaded me to get involved. He is an actor of real calibre, and I am thrilled to be able to write for actors of his stature and reputation. He has gone on to become a great friend, and I was lucky enough to watch him at the National Theatre on Friday night in ‘Under Milk Wood’. He was brilliant, as always and I’m sure we will work together again.

What was the casting process like, when it came to casting Dan’s fallen comrade, Billy? How did you find Gwydion Rhys, had you worked together before?

I knew of Gwydion from other work he had done, and when Pete suggested him as Billy, I was very excited. He brings a melancholy and humanity to the character of Billy who is representative of so many young men who saw their potential perish in the fields of battle.

The Wood was originally commissioned in 2018 to commemorate the centenary of Armistice Day and enjoyed a short tour of Wales. How did it connect with audiences, was that a rewarding experience?

Audiences across Wales seemed to really engage with the play, and reviews on the whole were very kind. It is a piece I am very proud of, and was determined to get right. As part of the research, I went over to the battlefields with my family. We found the grave of my Great Uncle Philip while we were there and it really brought home the sheer volume of people who have been touched by this tragedy. It gave a sense of the enormous responsibility to tell this story with the respect it deserved. The script of ‘The Wood’ is dedicated in his memory. 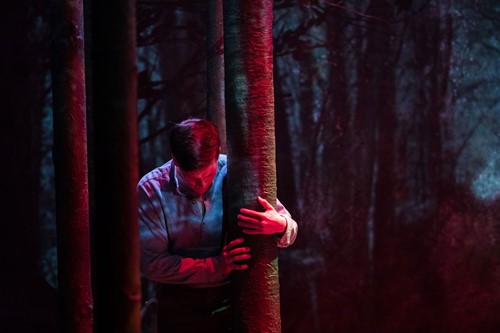 Did producing ‘The Wood’ for the video medium present any challenges for you and director Peter Doran in adapting your script? Were you able to work closely together for this version?

My involvement was largely down to reworking the script. Because of tight Covid protocols and travel restrictions at the time I was unable to visit the set. But we have a brilliant WhatsApp group that helped to keep in the loop. I am so proud to be an Associate Artist at the Torch Theatre and my huge thanks go out to the amazing team there who have made this streamed production happen.

The arts in all its forms are about connection and communication, especially with the shared experience of live theatre before an audience, which theatre lovers have been deprived of during the COVID pandemic. What have you missed most about live theatre during lockdown, as a creative and as an audience member?

The last play I saw before the pandemic was ‘Uncle Vanya’ starring my favourite actor, Toby Jones, and I had no inkling then that it would be almost 18 months before I would bet to see another live show. Sitting in the National Theatre on Friday was a profoundly moving experience. The thrill of seeing wonderful actors perform a beautiful script in front of other people is something I suppose I took for granted pre-pandemic. I also lost my dear Gran, Anne, earlier this year and read Eli Jenkins Prayer at her graveside. When Karl Johnson spoke those words on Friday night, I was a blubbering mess. It was a timely reminder to me of what we have lost. But there was also a sense of hope and optimism, and of theatre rising again. 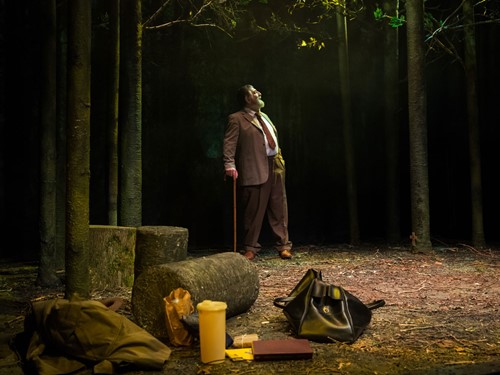 What are you working on currently, can you tell our readers anything about your next projects?

I have recently finished my first screenplay for a film version of ‘Grav’. The film is being made in Welsh by S4C, starring Gareth John Bale in the role of Grav. Peter Doran did a beautiful job of directing the stage version, and we have been incredibly lucky that the film version is being directed by Marc Evans. Marc, whose recent work includes ‘The Pembrokeshire Murders’, has shown a real passion and love for the story of Ray’s life, and I can’t wait to see what he does with it. We start shooting in a few weeks, and the film will be screened in September. I am also developing ‘Time Detectives’, a play for children with Theatre Iolo inspired by my obsession with Metal Detecting, the thing that has most helped keep me sane in this last mad year or so. I am also developing a few other new play and film ideas which I’m excited about.

Thanks for your time, Owen, and pob lwc with The Wood’s virtual tour!

‘The Wood’ will be commencing on a virtual tour of Wales from Tuesday 22 June to Saturday 3 July. Tickets are available via https://torchtheatre.co.uk/the-wood-streaming-online/ based on a pay-what-you-can price. Tickets are issued to one stream per household and can be watched as many times as you like for 48 hours from the screening date. Other venues that are hosting the virtual of ‘The Wood’ are: Theatr Mwldan, Theatr Brycheiniog, Pontardawe Arts Centre, Aberystwyth Arts Centre, Theatr Clwyd, and the Sherman Theatre. Tickets are also available to purchase directly from these theatres via their websites, again at a pay what you can price.