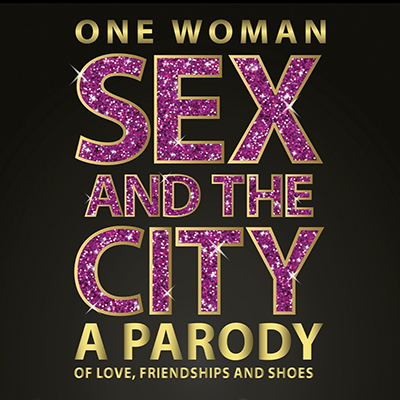 One Woman Sex and the City: A Parody on Love, Friendship and Shoes


Twenty years ago, four single ladies emerged onto television screens in search of love and cosmopolitans. From naked dresses, tantric sex demonstrations, and post-it notes, Sex and the City catapulted to raunchy glory, and secured a place in the hearts of millions all around the world.

In celebration of the twentieth anniversary of the show, and tenth anniversary of the first film, TJ Dawe (Director and co-creator of One Man Star Wars Trilogy, One Man Lord of the Rings) and comedic whirling dervish Kerry Ipema (Performer and co-creator) have masterfully crafted a show with all the laughs, puns, heartache and cosmopolitans that are sure to captivate audiences both of the original show, and those new to the world of Carrie and the girls. This is unmistakably the ultimate girl’s night out!

Kerry Ipema delivers a phenomenally comedic and charismatic portrayal of the ladies as they brunch, banter, argue, support each other and swoon over men and Manolos. Kerry embodies the characters with such skill, you’d be mistaken for believing there was more than one person performing. The care and consideration put into the performance is apparent from beginning to end, and will leave you reminiscing long after the curtains close.

This one woman tribute to Sex and the City is heartfelt and hilarious. Kerry’s portrayal of these four beloved characters certainly is unforgettable, and is a spectacle to be witnessed. Whether you are a Carrie, Charlotte, Miranda or a Samantha, there is something here for you. One Woman Sex and the City: A Parody of Love, Friendships and Shoes is a fantastic tribute, and will remind you just why you fell in love with those characters when they first appeared on television screens twenty years ago.

So grab a cosmopolitan, sit back, and enjoy as Kerry takes you on the rollercoaster journey of the ladies of New York City.

One Woman Sex and the City: A Parody on Love, Friendship, and Shoes

For more information and to book tickets visit https://torchtheatre.co.uk/one-woman-sex-the-city/ or call the Box Office on 01646 695267.