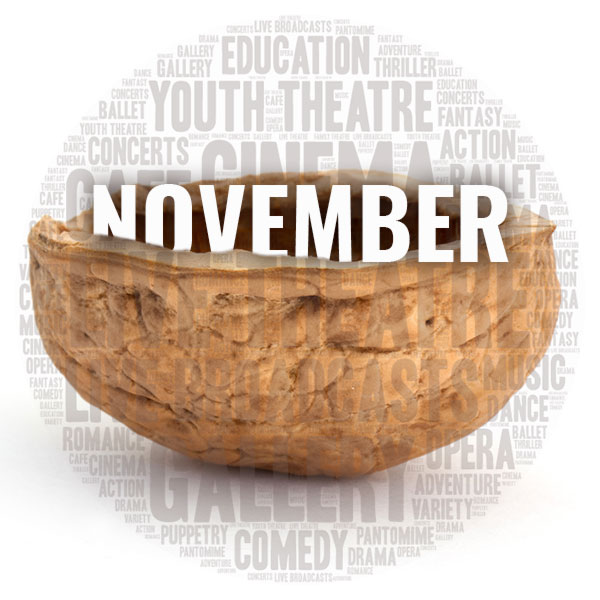 November In a Nutshell


Wowzers! It’s been a while since we updated our Blog, but we thought that we’d introduce a new theme; months in a nutshell!

We’ll round up each month’s Cinema, Theatre and Broadcasts for you, as well as let you in on any exciting goings-on (and coming-ups!) at the Torch Theatre.

While a little late for November, there is still a whole heap of excitement this month, and we can’t wait to share it with you!

At the forefront of this entry, we have the story of a partnership that became one of the outstanding political marriages of the twentieth century. This is the story of NYE & JENNIE.

Johnny English Strikes Again (PG) and First Man (12A) feature throughout the rest of the month, with The Little Stranger (12A) screening 19 & 20 November; A last chance to see, and a big hit with audiences. Written by Pembrokeshire-born author Sarah Waters, it’s been penned as ‘One of the most original British horror films of recent times’ [Independent] - Well worth a watch!

NT Live fans rejoice, as 20 November will see The Madness of King George III broadcast to screens, where ambitious politicians and the scheming Prince of Wales threaten to undermine the power of the Crown, and expose the fine line between a King and a man…

For those who fancy a bit of the feel-good-factor, Buddy Holly and The Cricketers Rock & Roll themselves on stage 21 November. As they say, whatever the season, whatever the excuse to party, make your Heartbeat a little faster with the show that has thousands of fans the world over saying: “I can’t believe it’s not Buddy!”

We have BRAND NEW FILMS screening from 23 November, with The Nutcracker & The Four Realms (PG) and Bohemian Rhapsody (12A) before we finally round off the month, with 30 November seeing us begin to enter the festive season with The Grinch (U), which is sure to be laugh-a-plenty fun for the whole family!

As an added treat, we are also screening Crazy Rich Asians (12A) from November 30, the critically acclaimed romantic comedy based on the 2013 Kevin Kwan novel of the same name.

And that’s that! November in a nutshell… well, most of November anyway!

Be sure to check in at the start of December for the second (and final) month in a nutshell of 2018!