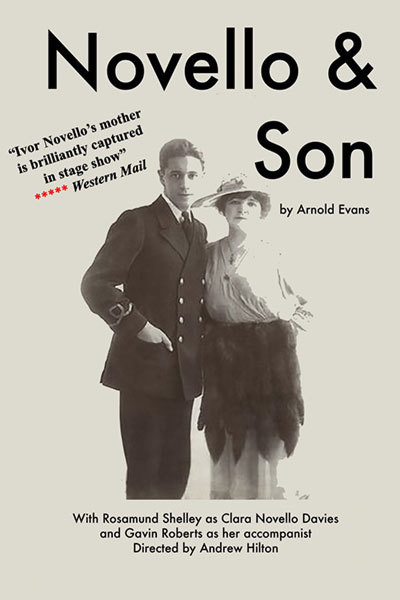 Novello's Mam is Coming to Pembrokeshire!


On Wednesday 29 June, the Torch Theatre is excited to welcome a brand-new play, Novello & Son, written by Pembrokeshire’s Arnold Evans.

Novello & Son is a play about Madame Clara Novello Davies (1861 -1943), mother of Ivor Novello, the Welsh actor, singer and composer, whose own popularity in post war Wales overtook his mother’s and effected their relationship deeply.

Although proud of her son’s success, Madame Clara Novello Davies believed music should serve a higher purpose than just toe tapping entertainment in the west end. She was from a generation who never allowed such minor obstacles as class distinction, sex discrimination or the occasional world war to stand in their way.

Novello & Son invites you to step back to 1938 for a unique opportunity hear Ivor’s mother, the legendary Madame Clara Novello Davies, sing his best loved-songs. Never the shrinking violet, she will doubtless take the opportunity to reflect on her own once glittering musical career and on Ivor’s indebtedness to her.

She may elaborate on her sterling (if overly-ambitious) attempts to regain the limelight she once enjoyed. But it is hoped she will have the fortitude to refrain from reliving the painful events that shaped her life and her relationship with Ivor.

The show features Rosamund Shelley and her pianist Gavin Roberts and is directed by Andrew Hilton. Writer Arnold Davies was born and raises in Solva, Pembrokeshire and has spent much of his working life in Cardiff. He has worked as a journalist and written for soaps as well as for the stage and radio.