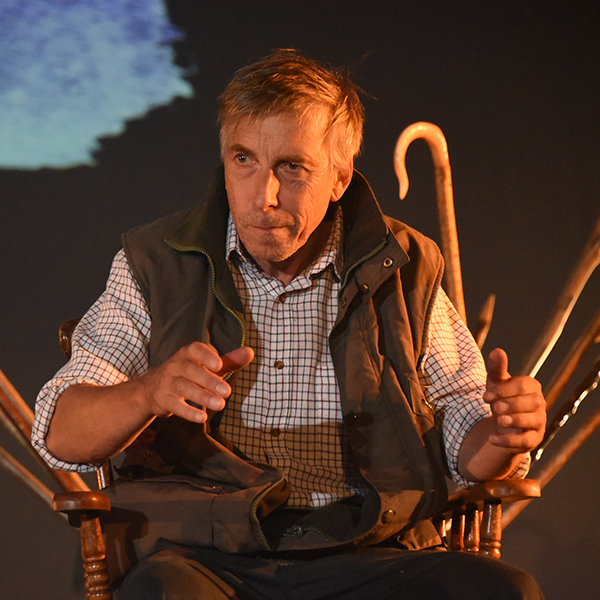 
A love letter to the NHS and part of the NHS70 Festival, National Theatre Wales’ The Stick Maker Tales comes to the Torch Theatre, Milford Haven on Wed 1 & Thu 2 May.

Peter Cox’s new one-man show, performed by Llion Williams (Belonging), is a heart-warming and heart-breaking tribute to hill-farming communities across Wales and their strength, endurance and determination to survive, even when the odds against them seem impossible.

Shepherd Geth Roberts might be getting on in years, but he still lives alone, high in the Elan Valley above the market town of Rhayader. He is a born story-teller who has spent his whole life working his wild and windswept farm, hidden away in the timeless Cambrian Mountains beneath the awesome beauty of the Elan night skies, unpolluted by city lights.

But now Geth faces his greatest ever challenge: his sight is failing and if he can’t see then his life has no purpose – he can’t work the farm or carve the exquisite Shepherd’s Crooks for which he’s famous…

National Theatre Wales operate from a small base in Cardiff’s city centre, but the nation of Wales is its stage, its incredible stories and wealth of talent their inspiration.

Previous National Theatre Wales productions include The Passion, staged in Newport, The Gathering/Yr Helfa, Roald Dahl’s City of the Unexpected; Wales’ biggest ever arts event, staged to commemorate the writer’s centenary on the streets of his hometown, and the award-winning The Radicalisation of Bradley Manning: about a teenager in Pembrokeshire who grew to be one of the world’s most influential and divisive political figures.

These are just some of the 50+ productions National Theatre Wales have staged all over the principality, everywhere from forests to beaches, from aircraft hangars to post-industrial towns, village halls to nightclubs , online and in apps, and in cities from Swansea to Tokyo.

For more information and to book tickets, contact our Box Office on 01646 695267 or visit https://torchtheatre.co.uk/the-stick-maker-tales-national-theatre-wales/