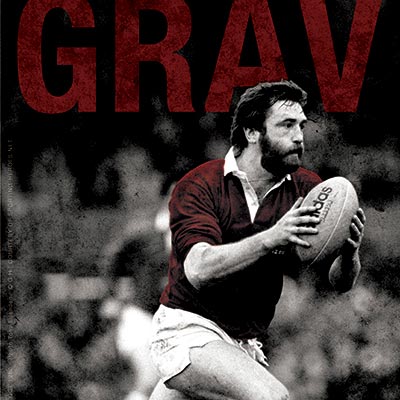 
A man with a life packed full of stories that deserve to be heard once more….

Following an incredible tour of Wales and the USA in 2018, including performances in New York and Washington DC, the Torch Theatre Company is delighted to once again bring the story of Ray Gravell to the stage for 2019.

Grav, written by Owen Thomas, embarks on its fifth national tour. Gareth J Bale reprises the role of Grav in this remarkable one-man show exploring the life and times of one of Wales’ most loved sons, Ray Gravell.

“Grav - the show that refuses to go away! This tour will see us give our hundredth performance and although I’ve not gone through the figures, it must’ve been seen by at least 10,000 people. In my forty years of working in the theatre I’ve never worked on a show with sure an appeal across the board. If you’ve not seen it, come and see what all the fuss is about - you won’t regret it I can assure you.”

The 18-date tour kicks off with four performances at the Torch Theatre, Milford Haven, prior to playing across the length and breadth of Wales, and culminating in four shows (Sun 17 – Mon 25 March) at The Hope Theatre, London, marking Grav’s debut in the UK capital. Grav will also receive it’s 100th ‘cap’ at the Carmarthen Lyric on Thursday 7 March, marking another incredible achievement in the story of this astonishing show.

‘I’m delighted to be back on the road with Grav. It’s a show that is close to my heart and even though I’ve performed it many times, it’s always an honour to play Ray. This tour will feature the 100th performance. That is something that I’m extremely proud of. Not many plays in Wales are performed over a hundred times but this play has grown and grown since the first performance in 2015. Grav is a universal story. Although it is Welsh in nature, the fact that it has been performed, and well received, at the Edinburgh Fringe Festival, New York and Washington proves that it reaches people far beyond Wales. I sincerely hope that we’ll have a similar reception in London at the Hope Theatre and I’m very much looking forward to playing there. As well as that ‘away’ fixture, I’m thrilled to be touring Wales again. We visit many wonderful theatres that hold many happy memories for me. No more so than the Torch Theatre, where we begin this leg of the journey on the 12th of Feb. West is Best!’

An incredibly well-respected rugby player, having represented Wales and the British Lions across the world, Grav was a Welsh icon both on and off the rugby pitch: An actor, a cultural icon, a father, a husband, a man with a life packed full of stories that deserve to be heard once more…

“I am thrilled that Grav is about to embark on its 5th National Tour. After performances last year in New York and Washington DC, I continue to be amazed at the ongoing journey of this play. I am delighted that this tour will see our first shows in London, and very proud that the show will pass its centenary of performances in Carmarthen. Here's to the next 100!”

Grav is an incredibly inspiring and heart-warming one man show, and has enjoyed unanimous acclaim for its ‘extraordinary’ production and as a ‘fitting tribute to a rugby legend’. In 2016, Grav won Best Production at the 2016 Wales Theatre Awards – the only award voted for by the general public. The play was also nominated for Best Actor (Gareth J Bale), Best Director (Peter Doran) and Best Playwright (Owen Thomas).