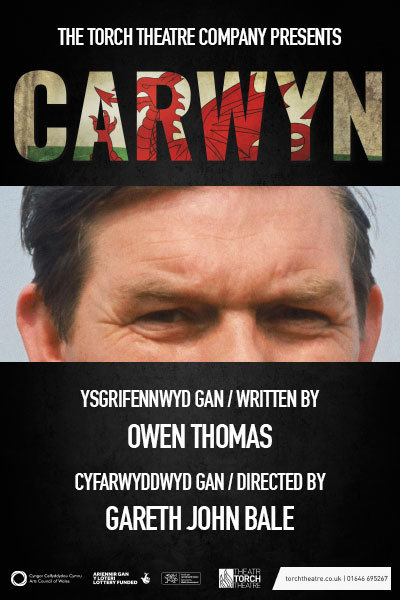 
The Torch Theatre Company are pleased to announce their Spring 2022 production, Carwyn, a one person play that explores the life of the former British and Irish Lions coach, Carwyn James.

Carwyn is the brand-new play from Welsh playwright Owen Thomas, the writer behind the award-winning Grav and will be directed by Gareth John Bale, who has played ‘Grav’ both on stage and screen. Taking on the role of Carwyn will be Llanelli born actor Simon Nehan who has starred in The Pembroke Murders, The Crown, The Snow Spider, Merlin, Casualty and most recently been seen on stage in Curtain Up at Theatr Clwyd.

Carwyn, which opens at the Torch on Tuesday 15 February and then goes on to tour venues across Wales in March, will attempt to unravel the enigma of a multi-layered man. A man ahead of his time. A man who was alone in a crowd. A man uncomfortable in his own skin. A man of whom it is said very few truly knew him, knew what made his heart beat and his mind tick. In his 53 years Carwyn James made an incredible, indelible impact on his homeland, and yet is somewhat forgotten. A man who adored sport, culture and politics, a man who adored Wales. Carwyn explores the life of a man whose career comprised teaching, broadcasting, coaching, and even espionage.

Owen Thomas on bringing his writing to life on stage at the Torch said:

“After Grav and The Wood, I am delighted to have the opportunity to complete a trilogy of plays at the wonderful Torch Theatre. Carwyn James was a complex and special man who led a relatively short but fascinating life. I hope Carwyn will remind people of his impact, not only on world rugby, but also on the language and culture of his homeland. It is especially pleasing in these tough times to be bringing this important story to some of our incredible Welsh theatres. I hope audiences will come out and support them.”

Carwyn James was an outsider for the whole of his life. A Cefneithin boy who was born in Rhydlewis. A cerebral thinker who used his powerful intellect to mastermind some of the greatest victories ever seen on a rugby field. A man who coached Llanelli, the British and Irish Lions, and the Barbarians to victory over New Zealand, but who never coached his country. To this day Carwyn James remains the only Coach to mastermind a series victory for the British Lions against the All Blacks. Carwyn burnt brightly, then slowly faded away.

“I’m delighted to be directing Carwyn for the Torch Theatre Company. It will be a pleasure to work with such a brilliant creative team to bring Owen Thomas’ words and this production to life. As a proud son of Llanelli, and a fantastic actor, Simon Nehan is perfectly suited to play Carwyn. Carwyn James was an incredible rugby coach, a man who literally changed how the game is played. However, there was much more to Carwyn than rugby. It will be a great experience to explore the life of a rugby genius and almost-forgotten legend.”

Carwyn James died alone in an Amsterdam hotel room in January 1983. Carwyn, the stage play, returns to that room on that Winter’s night and allows this unique man to have one final opportunity to look back over his short but eventful life. A life in which the beauty of the words of poets and playwrights were as important as the ebb and flow of rugby. This play will remind the country of one of her lost sons who contributed so significantly to our sporting, cultural, political, and intellectual life. A man who gave pleasure to so many but knew pleasure only fleetingly in return. A man ahead of his time. A man out of time.

“We are incredibly proud to have assembled such an exciting team to explore, and bear witness to the extraordinary life and impact of one of Wales’ most elusive and enigmatic cultural and sporting icons. We can’t wait to introduce Carwyn anew, to audiences across Wales.”

Carwyn opens at the Torch Theatre on Tuesday 15 February, running at various times until Saturday 26 February in the theatre’s Studio Theatre. There is a socially distanced performance on Monday 21 February and a BSL interpreted performance on Tuesday 22 February. The performance is suitable for those aged 12 and above. Tickets cost £15, 13 Concessions and £8.50 for those aged 26 and under. Bookings can be made through our Box Office on 01646 695267 or by clicking here. Carwyn will be touring across various venues across Wales from Monday 28 February 2022.