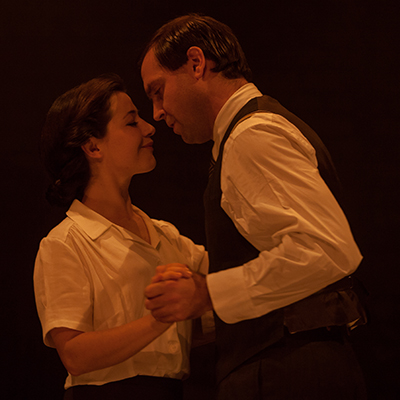 Aneurin Bevan, better known as ‘Nye’, and his wife Jennie Lee fought together for a new way of life for the people of Britain; he the Welsh Valleys’ firebrand on the Labour backbenches, who rose to become one of the greatest politicians this country has ever seen, and she the miner’s daughter from Fife who became a Socialist MP before she was old enough to vote. Together they navigated the turbulent world of politics to set up great British Institutions for the benefit of all - the National Health Service and the Open University.

This intimate and poetic play offers a fascinating insight on the marriage of one of the most outstanding political partnerships of the 20th Century and saw writer Meredydd Barker nominated for Best Playwright at the Welsh Theatre Awards 2017. A notable cast features Gareth John Bale as Aneurin Bevan, who has recently returned from New York performing his celebrated role in Torch Theatre’s one-man show Grav, and fresh from touring with the Royal Shakespeare Company, Louise Collins as Jennie Lee. This is Theatr na nÓg’s first co-production with Aneurin Leisure Trust, a natural partner for a play about their local hero.

"The running theme through all of our work as a company is to tell stories of inspirational characters, whether it be a large scale musical, show for schools or main stage drama. We wanted to tell the story of two extraordinary individuals, who both from humble origins succeeded in changing the lives of generations of ordinary people.”

The tour coincides with the 70th anniversary of the founding of the NHS in 1948, a year in which reflection on the NHS and its founding ideals have inevitably been making the news, and Bevan’s achievement recognised and celebrated across the country.

Tickets are already on sale and selling fast! Book now to avoid disappointment.

For more information and to book tickets visit https://torchtheatre.co.uk/nye-jennie/ or call the Box Office on 01646 695267.